This is the latest in a series of blogs I’ve called “A Year of Unlimited”, which isn’t perhaps the catchiest way to put it, but encapsulates my attempts to blog about every film I see while I’m signed up to the Unlimited service. I’m not linking to every one, so go and find them yourselves!

It’s interesting that the last film I reviewed, Fury, focused on World War II, while The Water Diviner is based both during and after the First World War. Unlike Fury, The Water Diviner is very much a drama as opposed to an action or thriller film, and it’s also the Russell Crowe show. The infamous actor directs and stars in this strange little film, which has excellent intentions that it seems to forget at times.

Crowe’s character Joshua Connor is an Aussie farmer who, as the title suggests, knows how to look for water in the desert (I’m sure there’s an allegory to be found there somewhere). In an unfortunate, Saving Private Ryan-type scenario, all three of his sons are lost in the battle of Gallipoli in Turkey, and Connor decides to honour his wife’s wish to bring his sons’ remains home. It’s all very respectful and honourable, but some strange plot decisions damage the film in my opinion.

Connor travels to Turkey and sets about trying to discover where his sons might be buried, while also engaging in a spot of cultural discovery – it’s quite interesting and timely that the film casts Turkey, and its Islamic traditions, in such a tolerant and open-eyed light. Much is made of how war affects both sides, and the horrors of the battle for the ANZAC (Australian and New Zealand Army Corps) troops, thousands of whom died fighting for the Allies. These parts of the film, including harrowing battle scenes, are among its best, with Crowe deciding against the stock good-versus-bad nonsense and instead focusing on the political aftermath for the Allied troops still in Turkey, as well as the Turkish people and their concerns for the future. 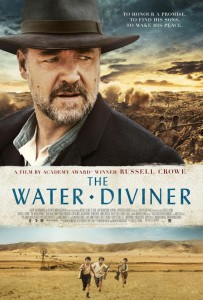 It’s other parts of the film that do the standout sections a disservice. The plot diverges between Connor’s quest, British bureaucracy affecting said quest (complete with moustachioed toff prat, of course), and his relationship with Istanbul hotel owner, Ayshe (Olga Kurylenko), and her son Orhan (Dylan Georgiades). This structure works for the most part, but any obstacle presented to Connor is breezed over almost immediately or through luck, and a later revelation – alongside some questionable Hollywood-style serendipity – drags the film from thoughtful historical fiction to silly, wish-fulfilment guff.

I didn’t think that the relationship between Ayshe and Connor needed to happen, and it takes away from the loss both characters have suffered. I get that Crowe wants to show that people can heal after loss, but it just seemed weird, especially given their age difference! Kurylenko is good however as a young mother who refuses to accept what life has dealt her, while Crowe is stoic and emotional in good measure throughout the film. He isn’t afraid to show his emotions, and even though we know his reputation as a man almost constantly aggrieved about something, his ability to make himself appear very vulnerable makes you care about Connor.

Other characters feature fleetingly and do alright in the circumstances – Jai Courtney’s rational Aussie commander takes pity on Connor, while Yılmaz Erdoğan as Major Hasan and Cem Yılmaz as Sergeant Jemal are pretty good as the Turkish army commanders with whom Connor begins to understand the battle and the aftermath. I felt that these three characters in particular were important for Crowe to portray, as they demonstrate the reality that soldiers and commanders on both sides of a war have lost just as much, and can gain as much afterward from one another.

The film looks good, depicting Istanbul as the quite spectacular, teeming city it is, and Gallipoli’s blasted, sandy desolation mirrors that of Connor’s Outback home. At times, the entire film seems to be aiming itself towards the Oscars with emotional turmoil or serious messages, but then something else will come along that either ruins the momentum (a shopping trip part way through the movie) or elevate it beyond that (a great moment on a train involving Turkish soldiers and the game of cricket).

I did like The Water Diviner, but ultimately I came out of it feeling like I’d watched a made-for-TV movie. It wasn’t spectacular, nor was it terrible. I suppose the best word to describe it is harmless – it’s got a good message and nothing in it will offend (unless you don’t like watching the horrors of war). I guess I felt that it could have been better had it not been for a few strange elements that take away from the whole.