This is the latest in a series of blogs I’ve called “A Year of Unlimited”, which isn’t perhaps the catchiest way to put it, but encapsulates my attempts to blog about every film I see while I’m signed up to the Unlimited service. I’m not linking to every one, so go and find them yourselves!

I try not to get overexcited about reviews of films I’m waiting to see, and I really don’t like getting overexcited about films that I’ve previously not thought much about. Mad Max: Fury Road is the epitome of the latter – I expected too much of a very good action film, and wish I had stayed unaware of the hype, because the film couldn’t match it.

A loose sequel/reboot of the Mel Gibson Aussie action classics, Fury Road features Tom Hardy as Max Rockatansky, the tortured and lonely Australian not so much wandering as tearing around a post-apocalyptic world in his supercharged car. This arid desert landscape is filled with steampunk nightmare vehicles and radiation-addled psycho humans, such as the leader of one settlement, the grotesque Immortan Joe (Hugh Keays-Byrne, who played Toecutter in the original Mad Max).

Joe is a dictator, doling out water to the poor and his psychopathic War Boys while trying to breed non-irradiated heirs, but one of his loyal freight drivers, Imperator Furiosa (Charlize Theron) goes rogue, helping Joe’s five trophy wives escape. In the simplest terms, a chase ensues. Add an unimpressed, imprisoned Max to the mix, stir in real cars, real stunts and desert landscapes and boom – you have an apocalyptic action bonanza, complete with a surprisingly feminist core.

Theron is more or less the star of this film. She is a badass, no-nonsense woman whose mission is to save other women from an unfair fate. Max is more or less her sidekick! Hardy grunts, grimaces and rarely speaks throughout, and is encased in a Bane-like mask for part of the film. He’s lucky he’s good enough of an actor that this works, though I would have liked to see him have more dialogue and emotion. 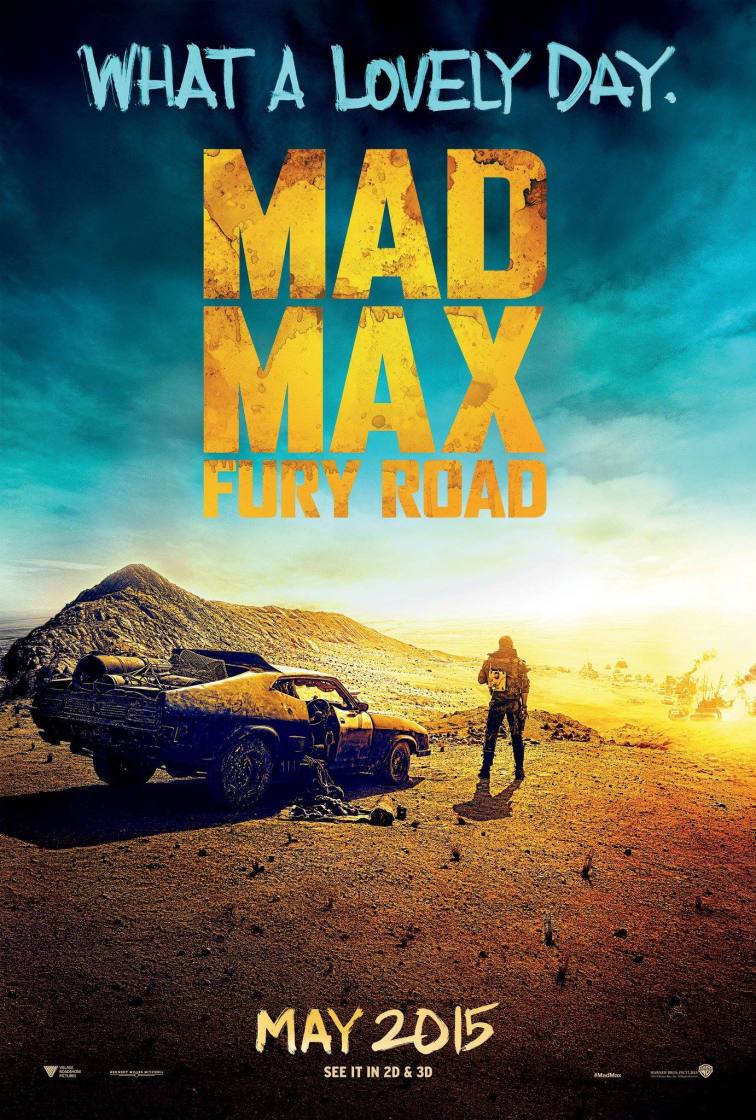 Theron is the action hero, fearless warrior and emotional centre of the movie, which I didn’t expect and did very much like – how refreshing it is for a woman to not be the damsel in distress in an action film! Other plot points including the wives and their intended destination only add to the sense that this most seemingly macho of action movies is keen to subvert the gender stereotypes laid against it.

Of the supporting cast, Nicholas Hoult is good but annoyingly eager as Nux, one of the nutty Warboys, while Keays-Byrne does well to be truly menacing with only his eyes and guttural voice behind another mask. Of the five wives, only Rosie Huntington-Whitely makes an impression as the leader Splendid Angharad (all of these names are crazy, especially compared to Max), while the others are forgettable. A shame really, as their characters could have been more memorable if there weren’t so many of them.

What most people want from this film is action, and it does deliver. Spiky, hellish scrapheap vehicles explode, flip and are obliterated for real onscreen, while stuntmen quite frankly appear to die throwing themselves from car to lorry, or 10-foot car mounted pole to tanker. It’s utterly batshit and amazing – there’s a character called the Doof Warrior who plays guitar on a vehicle full of amps – and yet I expected more.

I’m not sure if this is the hype (the film has received almost unanimously stunning reviews), but it took a long time for me to really be blown away by the action here. I was in the end – but in comparison to John Wick and its stunning approach to combat, I think I may have burned out on car-based shenanigans with The Fast and the Furious.

It’s not that the scenes aren’t fantastic, but more that they needed more variety. It’s telling that the final set piece – mixing music, fighting, high stakes and driving brilliantly – was my favourite, because it had everything at once, rather than a CGI sandstorm (the only poor use of computer effects) or a series of momentum-killing pauses between more races and chases.

Director George Miller and cinematographer John Seale – both 70 – should be praised though for shooting a frenetic, rip-roaring film that directors half their age couldn’t make. It looks amazing, and the action is in focus (!). They both realise that not using shakeycam improves the viewer’s experience, because we can actually make out what all the hard work was for! And Namibia’s desert landscapes are a spectacular backdrop on which to display car-nage.

The music, by former DJ Junkie XL, is very atmospheric and helps force the film along to its bruising conclusion, but bar a few standout tracks it feels a bit Hans Zimmer-ish (the BRAHM makes an unwelcome reappearance).

I’m probably being too harsh on the film – I did really enjoy it – but too much hype can give you far too high expectations. As it is, Fury Road is spectacular – an all-time great – but don’t expect the action film to defeat all others. Just go along for the ride (sorry).