US comedy can be accessible and hilarious, or in-jokey to the extreme, and Trainwreck is a perfect example of a film that darts between the two but isn’t quite great – a shame, considering that it is a relationship comedy that dares to be different.

Amy Townsend (Amy Schumer) is a New York journalist who lives her life in bars and on one-night stands, and who seems allergic to commitment or the idea of stability. Tasked with interviewing sports doctor Aaron Conners (Bill Hader) for her lad’s mag, Amy starts coming round to the idea of leaving her crazy single life behind, but the clue’s in the title – will she manage to stuff this up or not?

I know it’s not a shock, but rom-coms generally don’t appeal to me because they’re full of unfunny humour and predictable endings. Where Trainwreck is different is that it’s a Judd Apatow film – the director and screenwriter is responsible for The 40 Year-Old Virgin and Knocked Up, two more interesting and (at times) human comedies that happen to centre around romance. So you know you’ll get profane humour (mainly sexual), but you’ll also get a lot of drama punctuated with laughs and moments of real-life recognition.

Schumer is one of the US’ best new female comedians, with a successful and edgy TV show. So it makes sense that she wrote the script here (and actually reflected that it’s partly autobiographical), with her fictional namesake taking the position of the philandering man and giving the film some great laughs concerning her open perspective on sex and love. She’s obviously good at comedy, and I thought she was great in the more dramatic scenes, and yet she feels underserved by her co-stars and the script sometimes.

Hader, as Aaron, is a bit hit-and-miss – he can be funny but here I found him a bit boring, though his later dramatic scenes are again quite good. I was more impressed with basketball star Kobe Bryant, who plays an exaggerated version of himself as the male equivalent of a girl’s best friend, constantly asking Aaron relationship questions and interfering, and generally stealing the show when it comes to laughs. 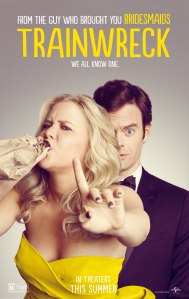 Bryant however is the tip of the cameo iceberg, with a lot of very US sport-specific appearances from basketballers and baseball players that probably go over the heads of every non-American. And this was a large part of the problem for me – a lot of jokes relied on knowing who these guys were, what they were famous for and so on, and it’s a bit dismissive towards the global audience to keep making these jokes. One later scene inexplicably features Matthew Broderick, the actor, and a host of US sportstars I didn’t know, and it felt like all the humour was derived from knowing who they were. This is an Apatow film issue at times (Knocked Up does the same),and it can really take away from scenes that you feel you should find funny, but can’t.

However, a certain British actor is hilarious in a series of mock movie clips (from when Amy and a previous boyfriend go to the cinema) – this is down to the fact that you know who he is! WWE wrestler John Cena makes a surprisingly sweet and comedic appearance as Amy’s supposed boyfriend, though other supporting actors and actresses are a mixed bag. Brie Larson plays Amy’s sister Kim, and has most of the emotional work to do – putting across a younger-but-wiser sister role very well. Colin Quinn, as the girls’ toxic father Gordon, is also very good as a man whose objectionable personality clearly imprinted on his daughter. Tilda Swinton, of all people, plays Amy’s ladettish magazine editor, and while almost unrecognisable with make-up, her character’s relentless ball-breaking and mockney accent grate, especially combined with absolutely zero laughs every time she opens her mouth.

I really liked the main premise’s switch to show us that women are perfectly able to enjoy and live a life of promiscuity, and while Amy’s story is an attempt to move away from that life, it’s refreshing to see it in a big film. I do think however that the film’s rush to solve any issues in the rom-com stereotype way takes away from it. At the end, it felt a bit like any other rom-com, even though it dared to be different until it got forced into a happy ending: I guess I was in that case swung by the drama into forgetting it was a comedy!

I did like Trainwreck, but I felt it didn’t get the best mix of drama and comedy, and I felt like it was the peak of the unnecessary cameos. In the end though I’m glad it’s tried to explore a type of person onscreen that most movies wouldn’t, and I like Amy Schumer – it’ll be interesting to see what she does next.