French-Canadian director Denis Villeneuve is staking a claim as the new David Fincher: I saw his film Prisoners a couple of years ago, and its three hours of unrelenting drama and discomfort made it one of the more tense films I’ve seen. Sicario sees Villeneuve – a master of building tension and foreboding – making a grittily real action movie from the real-life roots of the War on Drugs and South American cartel violence. Some subtle, enigmatic acting in turn helps make Sicario a must-see dramatic thriller.

FBI agent Kate Macer (Emily Blunt) makes a disturbing discovery during a raid on a Mexican cartel-linked house in Arizona, and is hand-picked by shady government agent Matt Graver (Josh Brolin) to work alongside him and the mysterious Alejandro (Benicio Del Toro) in finding the men responsible. Macer almost immediately finds herself plunged into the real, undisclosed battle against the Mexican cartels, and how far the US authorities will go to crush them; as well as why Alejandro, a non-American, is part of the undercover team.

Anyone who’s read the news in the last few years will have seen how horrific the situation has become in Mexico. Drug cartels hold power in massive areas of the country, and corruption in the government and police mean that any progress is soon lost somewhere else. Sicario aims to throw the viewer right into the hell on earth that exists there – massacres of innocent people, near war on city streets – and through Macer’s eyes we get horrific glimpses. From the start, the way the film is shot – by renowned cinematographer Roger Deakins – adds menace and tension, while the astounding, doom-laden score by Jóhann Jóhannsson forces the viewer into a state of near-panic even when nothing’s happening. 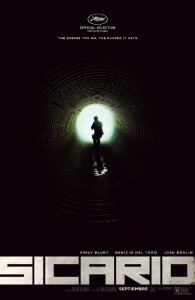 What makes it more remarkable are the locations – the slum-like sprawl of Mexican city Ciudad Juarez, the desolate desert on both sides and the militaristic border fence. These are real places teeming with real people, and at times it feels more like a documentary than fiction. Added to this is the feel of peril and power during the film’s gunfights – when someone fires a machine gun you’re deafened, and you see the impact these weapons have. Villeneuve has taken writer Taylor Sheridan’s believable, murky story and made a gripping, uncomfortable movie that stays with you afterward, because nothing about it seems implausible, and that makes it all the more disturbing.

Blunt is a great actress, and Macer is mostly either concerned, aggravated or in fear, you can see how troubled she is by what she’s witnessing. At every turn, she tries to compare what she’s doing to what her conscience tells her is right, and you feel for her as she disappears (metaphorically and literally) into the underground. Brolin brings levity and a ruthless carelessness to Graver, and I like that the actor is not playing the usual gruff and mysterious silent-type. That role falls to Del Toro, whose character is the “hitman” of the title (this is what sicario translates to in English). He’s one of the best character actors (see Sin City or The Usual Suspects), and here gets to be enigmatic and chilling; a man who Macer doesn’t know whether to trust or flee from – the actor’s mumbly, quiet chatter belies his incredibly dangerous behaviour, and all the while you’re wondering what he might feasibly do next, or to whom he might do it. Of the supporting cast, only Macer’s FBI partner Reggie Wayne (played by British actor Daniel Kaluuya) stands out, his concern for his colleague and for the law to be upheld making him the most sympathetic in the film!

I mentioned the way the film was shot – there are some shots and scenes that are amazingly artful, with the harsh desert light illuminating the grim reality of what the team are facing up to. This isn’t a film where terrible things are found at night, but exposed in the light for all to see. In turn, the filming of the action is masterful – the slow, creeping build-up, the pounding, driving music and the quick cuts between characters all combine to make you forget to breathe, before everything explodes in a release of tension and ear-splitting gunshots.

If I had any complaint to make about the film, it’s that the lulls between these sequences can be a bit dull, but I assume that’s the point – and this is played to perfection in one instance, where an otherwise relaxing scene quickly gives way to something far more sinister. Death or violence is always around the corner here, as I imagine it must be in some of the areas where these real-life scumbags operate. I highly recommend seeing this while it’s out (despite not having been released fully anywhere, it’s getting a sequel, which could be interesting if tackled correctly) – this sort of tense, adult drama is exactly what cinema needs, and it’s superb at tackling a contemporary issue in such a hard-hitting but skilful way.