Without doubt the best DC universe movie (not a difficult achievement!), and definitely one of the better recent comic-book films, Wonder Woman blazes one hell of a trail for female superheroes, movies and directors.

Diana (Gal Gadot) is one of the Amazons, an ancient race of warrior women created by Zeus to defend humanity. However, her mother Hippolytia (Connie Nielsen) has withdrawn them from the world on the mystical island of Themyscira, much to the consternation of militaristic sister Antiope (Robin Wright). Everything changes when WW1 spy Steve Trevor (Chris Pine) somehow crash-lands, and Diana feels a compulsion to intervene against the heinous work of German commander Ludendorff (Danny Huston) and mad chemist ‘Dr Poison’ (Elena Anaya).

Director Patty Jenkins (originally set to direct Thor: The Dark World, and dodged a bullet) is both the first female director in this latest phase of comic-book movies, and the director of the first female-led superhero movie in a proper franchise (Elektra doesn’t count). She crafts a thrilling, thoughtful and stylish movie that most evokes Captain America: The First Avenger – it’s well set in WW1 this time, perfectly judges the insanity, despair and also hope of the war, and gifts us another likeable, iconic hero standing up for what’s right.

Diana’s child-like naivety about people being good is brought into sharp focus as she adjusts to WW1 Europe and the fraught world she’s sworn to protect, while Steve’s flawed decency and that of his rough-and-ready comrades brings home to her that everyone has heroic potential. This is a story and a movie that foregrounds the superhero’s super perspectives on right and wrong above her ability to bound great distances and block bullets with her gauntlets.

From the fantastical yet grounded Themyscira through to gloomy, muddy and smoky Europe, it looks excellent, though some naff CGI is crowbarred in at the end for a less unusual and more stereotypical super-finale. At times, Matthew Henson’s cinematography appears too similar to the metallic gloom and murk of Batman v Superman, though that film’s director Zack Snyder’s typical speed-ramping of the action actually works better here – perhaps because we can actually see what’s going on in the well-shot set-pieces, thanks to editor Martin Walsh.

The majority of that action is great – from formidable Amazon warriors effortlessly evoking John Wick with crossbows, through to Wonder Woman utterly destroying swathes of German soldiers. Perhaps the most interesting thing is how evocative a lot of the action scenes are – there’s definitely no doubting the main set piece, Diana’s fury at the injustice all around spilling out in a one-woman charge on the German lines. Much like Captain America and even Inglourious Basterds, the scene balances out historical wish fulfilment with that sense of cinematic righteousness (it is even addressed later in the larger context of struggling to keep hope, as a reminder of the hell of war). 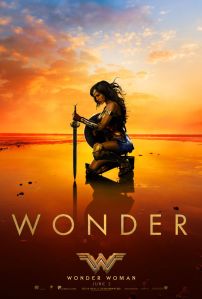 The soundtrack from Rupert Gregson-Williams is predictably bombastic and carries the action along too, while the character’s central theme from Batman V Superman surges in every so often to give it all an extra kick. If I had a plot complaint, it would be that the main villain (and their dastardly reveal towards the end in a twist) is fairly uninteresting just because the human bastards are worse.

Unfortunately, when you have a superpowered heroine, you need a capable adversary, and this is where the film trips up a little. However, for a hero “origin”, the rest is pretty excellently done. The well-judged comedy on show reminded me a lot of Superman, Diana’s fish-out-of-water antics funny while reminding the viewer of how bizarre gender politics have (and continue) to be, at the same time.

Gal Gadot melds together a performance from Chris Evans’ Captain America and Christopher Reeve’s Superman comprising naivety and positivity, but adding a ferocity against what she perceives as injustice. The Israeli actress was the very best thing about a very terrible BvS, and here she does it again, bringing some heart and humour to a dour film universe in much need of it.

Chris Pine’s co-star role feels groundbreaking, bizarrely and simply because he’s playing second-fiddle and the one who “needs protecting” – the man is the damsel! He’s great though because he utilises his trademark charm and comedic ability, but also his rarely seen acting range (see Hell or High Water), as Trevor strains to explain to a more and more crestfallen Diana that it’s not all as simple or as polarised as she thinks.

Of the rest of the cast, Nielsen and Wright’s royal sisters offer an impressive blend of protective parent and stern mentor that are feminine inversions of stock male archetypes, and in all honesty the partitioned world of Themyscira and their performances could have been given more time to develop. In our world, Huston chews the scenery as sadistic bastard Ludendorff, supported by the largely wasted and enigmatic Anaya, whose role of mad doctor is again an interesting inversion of the standard male stereotype (particularly her story’s conclusion).

The best of the rest include Lucy Davis’ put-upon, ever-cheery secretary – who provides a lot of the clash of culture laughs (but again doesn’t appear that much), while Ewen Bremner, Said Taghmaoui and Eugene Brave Rock embellish stock rogueish war characters with a smidgen more humanity than such roles are usually allowed. Finally, Thewlis pops up with an intriguing performance that reminded me a lot of his great work as Remus Lupin in the Harry Potter series, the actor’s many abilities on show (though to say more would be to spoil the film).

So with the exception of the rote conclusion (which does however, like Captain America, have elements of maturity and introspection that are surprising), Wonder Woman is excellent. It’s about time that the superhero renaissance gave a heroine the chance to shine, and with a female director finally given a blockbuster chance (this is the first female-directed film I’ve reviewed here), I hope it opens eyes and proverbial floodgates.