I explained years ago now how my Unlimited membership works, and I recently saw another of their secret screenings. These almost taunt you to go just to see what they’ll be, just in case you miss out on something good ahead of its general release. The latest – Love, Simon – wasn’t something I’d have gone to see, and while quite mediocre generally speaking, its central focus on a teenage boy coming out as gay and falling in love is groundbreaking.

Simon (Nick Robinson) hides his sexuality from his parents (Jennifer Garner and Josh Duhamel) and his three best friends Leah (Katherine Langford), Abby (Alexandra Shipp) and Nick (Jorge Lendeborg Jr ), but an anonymous post on a school social network leads him to get in touch with another male classmate struggling to come out. Simon starts to fall for ‘Blue’, but has to deal with blackmail, confusion over Blue’s real identity, and his doubts over the reactions of those close to him learning his secret.

Writers Isaac Aptaker and Elizabeth Berger adapt Becky Albertalli’s novel into what can mostly be said to be a standard teen drama/comedy about love and growing up, essentially. It’s sometimes quaintly sweet, though a little too like its many forebearers in other more mawkish areas (the usual emotional beats are hit, from betrayal to resolution and so on).

However, it feels like a step change in the way cinema depicts teenage life, depicting homosexuality as normally as it should be through the prism of a coming of age, romantic comedy-drama. Despite this element, its overall mundanity shows that whatever the sexual preference of the teens onscreen, these films are nearly always the same! A weak, underutilised supporting cast doesn’t help, nor some of the ways that it wraps everything up very neatly.

However – this is the first movie ever released by a major film studio that focuses on a gay teenage romance, and as mentioned above, the film’s main focus is one that really shouldn’t be new to us, but is – and it feels like that. There’s also an interesting element in that the film doesn’t fall into the trap of focusing too much on homophobia, though this is a double edged sword thematically speaking – we all know how pervasive this can still be, so I feel that some people might wonder why the film papers over this as it does.

Director Greg Berlanti gives the film a teen drama/comedy tinge but with some heavier notes later on, allowing the story time to breathe and comically even creating a sort of procedural as Simon tries to figure out who Blue might be. He also depicts their email conversations quite astutely and convincingly, where other films focusing on modern technology often fall down.

This movie is so quintessentially American teen that it doesn’t really have a distinctive look or feel, though the suburban town setting feels cinematically authentic (it just feels…right in terms of all the cliches, from the school stadium to the unrealistically huge homes for small families). The teen oriented soundtrack, to its credit, does feature quite a few older songs, with the modern vinyl revival offering way older tracks played in Simon’s room (again – so massive for a teenager!) 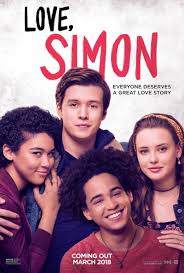 Nick Robinson’s lead performance is probably the strongest on show, the young actor bringing a believable depth to Simon as he struggles with when and how to come out to his family and friends, and falls in love for the first time. He also effortlessly shows subtle shifts in behaviour as Simon tries to puzzle out who ‘Blue’ might be, as well as around his friends and family members as everything changes.

More than anything, Robinson is why this film worked for me, I think. Without him being as good, comfortable in his own skin and talented enough to give us a believable Simon, I’d be loath to give the film much more credit. This is largely down to the fairly awful supporting cast…

Katherine Langford (of 13 Reasons Why) is the stronger element of the three best friends, but her character is unfortunately largely ignored in favour of a more distracting love triangle involving the other two. As it is, the young actress doesn’t have much of a chance to show what got her noticed in the Netflix show, despite her character having interesting (and unexplored) depth in her friendship with Simon.

Alexandra Shipp and Jorge Lendeborg Jr are varying degrees of one note as the other two best friends, Shipp having a little more to do as the subject of another classmate’s affections (into which Simon is dragged) but is mostly underused otherwise, while Lendeborg Jr is like a lost puppy, wandering in and out of the film every so often as a pretty rote, sporty but friendly kid lost amidst the plot and more out-there characters.

The latter point comes in the form of the infuriating, bizarre Martin, played with insufferable snark by Logan Miller. As the kid who thinks he’s cool, but just isn’t, Miller’s performance is over the top, and yet where the plot takes Martin means that whatever the actor tries to do to stand out, something comes along to flip your view of him. He’s clearly trying hard, but the way the character is written means he ends up infuriating no matter how you end up feeling about him.

Garner and Duhamel managed to make me (and I imagine a lot of other viewers) feel old by playing the parents, quite well despite their poor characterisation. Garner’s mum is that sort of perfect liberal parent Hollywood loves to pretend exist everywhere, though she has a few touching scenes with Robinson, while Duhamel is clearly cleverly cast against stereotype as a seemingly macho dad with a lot of depth and sensitivity beneath the bluster.

One final mention ought to go to the disgraceful waste of Tony Hale as the principal – rare as it is to see Buster Bluth outside of Arrested Development, Hale is absolutely pointless here, saddled with terrible jokes (some that are really off-key given the film’s messages) and essentially dumb comic relief for any easily amused idiots watching.

I have definitely mentioned enough that Love, Simon is mundane, but at the end of it all it’s great that it has been made, and I hope it does well. It’s got a touching story for the main character that highlights the difficulty faced by so many young people just trying to be who they are, and regardless of its overall quality, it’ll likely be looked back on as a welcome first.