A competent but disappointing film, Solo: A Star Wars Story is for me Disney’s first misstep with the franchise.

Han (Alden Ehrenreich) survives on his home planet of Corellia with girlfriend Qi’ra (Emilia Clarke), before venturing away into a galazxy dominated by the Empire and filled with “scum and villainy”. Encountering Chewbacca (Jonas Suotamo) and Lando Calrissian (Donald Glover) for the first time, Han enters a life of crime alongside grizzled mentor Tobias Beckett (Woody Harrelson).

First things first – this is another movie borne out of a huge amount of behind the scenes turmoil, like predecessor Rogue One. Originally directed by comedy kings Philip Lord and Chris Miller (The Lego Movie, 21 Jump Street and 22 Jump Street), they were fired due to “creative differences”, before Ron Howard was drafted in.

There is a disparity between what Lord and Miller would have made, and what Howard has competently done in a very short space of time. This is keenly felt in the lacklustre humour, but its problems are more a mixture of filling in gaps we didn’t need filling, and a film that ultimately doesn’t bring much to the series.

Howard does a great job in the circumstances of making it visually interesting, particularly different planets and scenarios, but can only work with the script he has, from original series writer Lawrence Kasdan and son Jake. Their script tries so hard to match up with what came before that it ends up being the worst kind of prequel.

This isn’t really needed, it’s not cinematically interesting and I wonder what Lord and Miller would have done to make it less predictable. What interesting elements there are are soon neglected, a shame when Star Wars should be expanding into the unknown. It isn’t all bad – the look and feel (thanks to cinematographer Bradford Young) is industrial and gritty, more street level mixed with glimpses of high income crime (the creepy shadows and tacky gold of villain Dryden Vos’ spaceship, in particular, felt like what I imagine Trump Tower to be like).

I wanted to see more of Corellia, an industrial wasteland and Imperial ship building planet, as it felt oppressive and cyberpunk, but instead we’re thrown from planet to planet every few minutes without time to settle. The ice planet where a heist takes place, and a sandy desert island location for the finale, are interesting but feel underexplored.

The action is inert because we know Han, Lando and Chewie make it out alive. Peril only extends to new characters, while the big set piece – the famed Kessel Run – is inventive, clever and fun, but particularly peril-less. This is a shame given the incredible effects work there and on the “train” heist, which brought a very different, inventive and unique look for the small amount of time they were on screen.

One element I liked was that it felt and was shot like a Western at some points. Had this been extended across the whole film, it’d have created an interesting, idiosyncratic style quite different from what we’ve seen from Star Wars. At the very least, it shows the potential for staging different types of film within the universe. 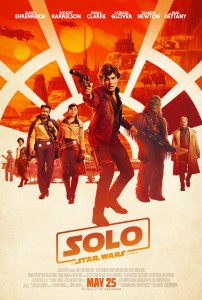 The score is underwhelming and disappointing from John Powell, and the Solo theme from John Williams is a really low point – it’s forgettable almost immediately! The uses of his original themes are the only time the soundtrack really soars, which says something about how hard it will be without him after Episode IX.

I feel most sorry for Alden Ehrenreich, who does as well as he can with the impossible job of imitating Harrison Ford, giving Han a sense of youthful enthusiasm (before becoming the famously arrogant sod). While he can’t replicate Ford’s snarky rumble, Ehrenreich expertly replicates tics and facial expressions, and grows into the role. However, the fact that it still doesn’t quite work shows that making a prequel about an iconic portrayal by an iconic actor is a fool’s game.

Clarke has made a career out of not being that great an actress (I’m sorry, but it’s true! And I love Game of Thrones), and she essentially plays what should be a femme fatale with interesting, complex shades without power, verve or conviction. It doesn’t help that the character shifts constantly, and she’s far better in the film’s earlier stages.

Harrelson continues to get away with playing a similar character over and over, Beckett (a really non-Star Wars name) another drawling, hard nosed comedic git, with a little extra grit and ambiguity. Thandie Newton is woefully underused as Beckett’s partner Val, deserving of a much bigger role given her recent prominence in Westworld.

Suotamo replaces Peter Mayhew as Chewbacca, and is more feral and rangy, with much more to do than in The Last Jedi. I do wish we had subtitles for the Wookie language, though this is a series issue with the strange, invented languages. Glover’s Lando is one of the more enjoyable and notable performances, and made me want a solo film (no pun intended!) as he imitates and builds on Billy Dee Williams’ original performances with an air of cool arrogance, watered down by a propensity to make mistakes.

His interplay with Phoebe Waller-Bridges’ idiosyncratic L337 is also interesting, bizarre and welcome, the actress providing a more rowdy, unpredictable droid than we’re used to, but is again sadly underutilised. Give me a film with these two and the snarky Val, and we’d definitely have a more interesting time.

Finally, Paul Bettany wields an air of menace and cut glass British accent as villain Dryden Vos. There’s not much about the character other than his villainy, but he is at least trying to make an impact, particularly with a twitchy unpredictability.

Solo unfortunately smacks of fan service, featuring a story that didn’t really need to be told. While fun and diverting, it doesn’t feel necessary, has low stakes and drops its more interesting ideas – the less said about the obvious sequel baiting come the end, the better.