First Man is a quietly impressive and interesting biopic of Neil Armstrong, aided by some quietly powerful performances. It’s only really diminished by wasting Claire Foy, and by painting its protagonist into the emotionally stunted biopic corner.

Armstrong (Ryan Gosling) joins the Apollo programme as the US drive to beat the Soviets in the space race accelerates. While his driven focus sees him ascend towards a place on Apollo 11, there is an effect on his family – particularly his wife Janet (Claire Foy) – while Armstrong himself becomes more afflicted by a prior tragedy, his unfussed facade cracking.

Directed by Damian Chazelle, whose films Whiplash and La La Land saw critical and awards acclaim, First Man from the outset is a biopic straining to be different. Electing to shoot different elements in varying lens types, Chazelle and cinematographer Linus Sandgren ground the various compartments of Armstrong’s life (his family, the testing programme and the space missions) in ever ascending scales of film.

This begins at the film’s onset, and the scope of the camera widens as the scale goes from intimate, family life to the whitewashed and industrial testing areas, through to the unimaginable vistas of space. This approach, disorienting at first, is a really clever technical achievement because it divides the film into acts, and never forgets the intimate even as we are confronted with the epic.

The special effects (barring a couple of shaky scenes) are solidly effective at depicting the vastness and scale of space. In particular, they are emboldened not only by the camera choices, but also by the film’s insistence on practical sets that show the Apollo programme as the improvised, imperfect and at times dangerous jump into the unknown that it was. 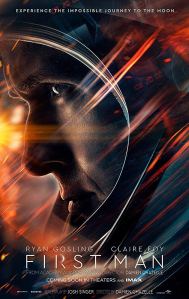 This is particularly clear in the intensely shot launch and space scenes, particularly an immense stretch when Armstrong is part of Apollo 8. From the uncomfortable and earth shattering launch through to a near disaster in orbit, Chazelle and editor Tim Cross eke out every groan and bang from the spaceship, and thrust you dizzily into the insanity of launch and zero gravity.

Justin Hurwitz’s score is remarkably fresh despite being – ostensibly – quite old fashioned. It utilises the theremin (Bill Bailey fans will be more than au fait with this mad instrument) and strings to quite an affecting degree, matching emotional moments between the family but soaring as the scale increases to a bombastic crescendo on the Moon. Knowing that the Armstrongs also enjoyed theremin music adds an extra emotional heft to its use.

Writer Josh Singer adapts Armstrong’s life from a previous book, and his handle on the enigmatic astronaut and his family sees his script attempt to show us that the secretive Armstrong – who improvised one of the most famous lines in human history – was a flawed, intelligent and emotionally closed off man brimming with a repressed love for his family, affected by a tragedy that eventually ends up underlining his magnificent achievement.

The film is by no means perfect – much is surmised, and it falls victim to the “fashionable” thing of converting intelligent yet flawed men who dragged us forward scientifically (see also: The Imitation Game) into savants with barely any emotional centre. Gosling’s depiction of Armstrong is hamstrung by the writer’s insistence that he never properly grieved for a loss, and this is a huge element of the story’s emotional heft, somewhat cynically assumed as opposed to being a fact.

This undercuts the characterisation of Armstrong and his wife, and works as a good segue into discussing the acting! Gosling is quietly impressive, and is nailing the impassive closed off market at the moment (see Blade Runner 2049). He measures Armstrong’s professionalism and control with the potential for emotional suppression to explode out, and I can’t fault the actor for playing the role as written, because it’s an underrated, strong performance.

It’s with Foy’s portrayal of Armstrong’s wife Janet that I got particularly annoyed with the writing. The British actress is intense and so excellent in most performances that it felt a real robbery that she has so little to do – we spend a lot of time seeing how Janet deals with bringing up the children and with her husband’s obsession. At times Foy is great, but only when allowed to be by the script.

It’s only once the film inevitably cascades towards Apollo 11 that Janet is given much more to do, a couple of scenes allowing Foy to release this 60s housewife’s pent up pressure at her impassive husband. The rest of the time, despite the fact that she is equally as affected by the tragedy defining Neil, she is not given the depth that the real woman surely demands.

The rest of the cast is a rogue’s gallery of character actors making up the NASA quotient, from the granite faced Jason Clarke and gruff Shea Wigham as wisecracking, thoughtful astronauts through to Kyle Chandler’s businesslike commander. There are a wider range of blink and you’ll miss them familiar faces, but the ensemble does a great job of showing that NASA was less machismo, more science, and determined to win this particular race.

Corey Stoll’s Buzz Aldrin, in an extended cameo, is different enough to the remainder of the team that he stands out, Stoll giving the other famous Apollo 11 crewmate a brazen, outspoken edge that sets him apart, before dovetailing well with Gosling’s icy reserve toward the end.

I really enjoyed First Man, and was quite impressed. I’d definitely recommend it, not just to those with an interest in space. It’s a shame it squanders the acting ability of its main actress, but that’s a fault of the script, and the way that the movie chooses to focus intently and emotionally on Armstrong, rather than the family and their sacrifices.