A really disappointing ending to the new trilogy and a bizarre end to the whole Skywalker saga, The Rise of Skywalker is one of the most chaotic, plothole filled blockbusters I’ve ever seen.

A year after The Last Jedi, Rey (Daisy Ridley), Finn (John Boyega) and Poe (Oscar Isaac) discover a new threat on top of that posed by the First Order and Kylo Ren (Adam Driver) – it seems the Emperor (Ian McDiarmid) has returned from his fiery death with more insane plans for the galaxy.

My biggest issue, straight from the start, is the thinking that leads to the last plot point in that synopsis – one example of its failures. JJ Abrams, returning to direct after The Force Awakens and following Rian Johnson’s excellent (in my opinion) Last Jedi, essentially throws away everything good about the second film and makes the most fan servicing slice of blockbuster rubbish you’ll see.

I’m only so negative because I enjoyed the other films so much! Force Awakens was a reheated A New Hope, but had excellent characters and chemistry, and was a welcome surge of Star Wars years after the disappointing prequels. Last Jedi built strongly on shaky foundations to make a genuinely exciting, unexpected and brave story, setting up interesting choices.

All of which leads me to note that Disney/Lucasfilm have botched this trilogy (and to an extent their efforts with Star Wars so far, bar Rogue One and The Mandalorian – I enjoyed the former and haven’t seen the latter yet). Originally this was set to be made by director Colin Trevorrow, ditched via “creative differences” not long before Last Jedi was released. Given how shit Solo was after the same happened, this was not a good move.

His script was taken and rewritten hastily by Abrams and Chris Terrio – as a result, nearly everything Johnson did was abandoned, and everything superfans and nerds wanted (and hated Last Jedi for) was crowbarred in, with some of the bigger elements (the Emperor’s return) just…there, with no rationale except “this’ll be cool!?!”.

Abrams is a talented filmmaker who previously has been able to rise above his films’ scatterbrained approach to plotting, through sheer entertainment and an amazing ability to make character interactions sing in next to no time at all (both Force Awakens and Star Trek are evidence of this).

This has seemingly gone with Rise of Skywalker, in which glaring, obvious problems detract from entertainment. Almost immediately the plot starts to actively collapse in the face of reason – yes, I know it’s a fantasy space film, but there’s only so much circumstantial story nonsense I can take before it stops being fun and starts driving me mad.

Abrams and Terrio have actually revealed they had lists of things they wanted to see as fans here – which is just not a good start. And so we’re piled upon by nonsense nostalgia from the first scenes to the last, forgotten and famous characters alike reappearing inexplicably when the plot demands for the maximum approval of superfans everywhere.

This is a dangerous approach, as it risks giving fans too much agency and respect when – as we know – people overly passionate about their favourite pop culture content are often aggressively idiotic. So we end up with a Frankenstein of a movie that sporadically offers entertainment for the majority because it’s offering wish fulfilment for the minority. 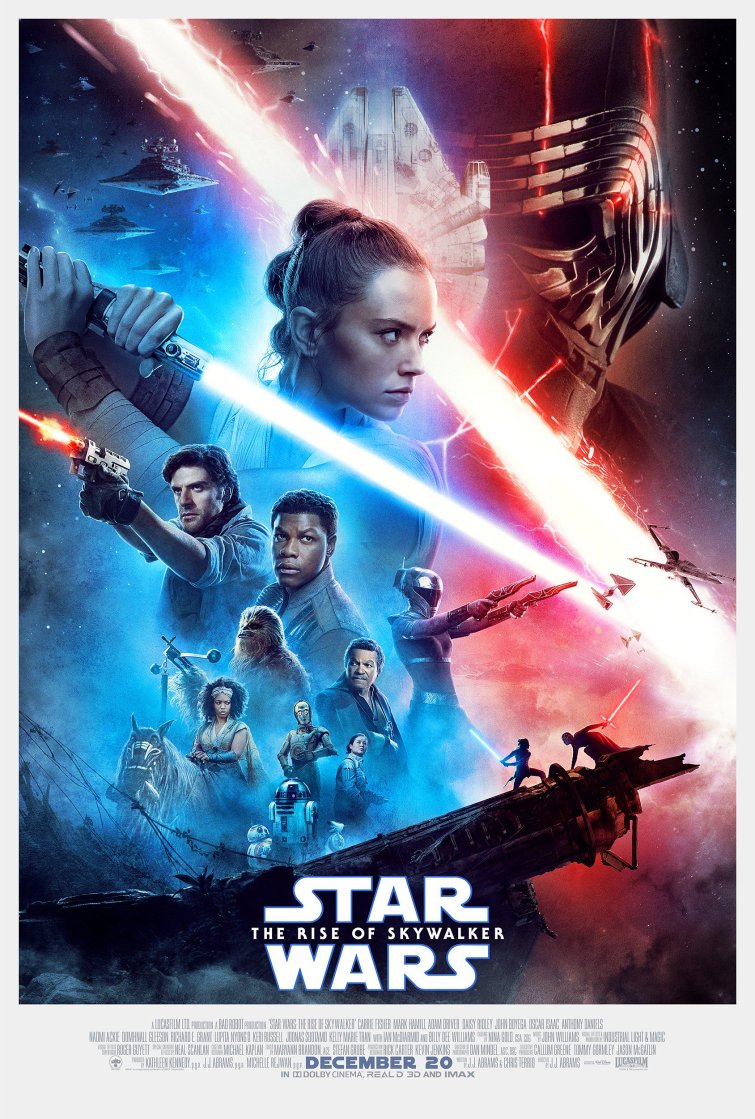 Abrams also abandons the throughline of most characters he started this trilogy with, Rey and Kylo’s plots tying up at the expense of any development for literally anyone else. Most dialogue is exposition shouted at someone else in a relentless chase to another plot device that unlocks another plot device, pace and tension attempting to mask larger problems for the majority of audiences.

Technically I also found this disappointing – while sets and locations are often exemplary (and the return to largely practical aliens is welcome), the two editors (Maryann Brandon and Stefan Grube) fail in mammoth efforts to knit it all together without the holes showing. Cinematographer Dan Mindel does what he can to make the often stunning alien vistas visually distinctive, but we often spend so little time in them that his work isn’t given much time to be seen – and often smeared by green screen overload.

Most sadly, I was really underwhelmed by John Williams’ final Star Wars score – the film score maestro signing off from one of his most famous jobs with what was essentially a greatest hits shuffle.

The actors do what they can, which in the case of Ridley and Driver is the main highlight of the film. Both their roles and the interplay between their characters (one Johnson element wisely kept) with much more class and depth than the film deserves. Ridley balances doubt, anger and empathy while Driver embodies confusion and rage. Their scenes together, as well as boasting some great lightsaber fights, are among the film’s strongest, and they really deserved a better send off.

Boyega and Isaac are really, really shafted by the script, which dials back their character development in Last Jedi and makes them ciphers. Poe is the general unsure he should be one for about a minute, before then just quipping all over the shop and forgetting about it, while Finn has a secret to tell Rey he never manages to (why include this then?!), seemingly forgets his love interest Rose exists, and serves only as a sort of shouty co star. Isaac’s character was originally planned to die in Force Awakens, and while I’m glad he didn’t with how integral he was in Last Jedi, Rise of Skywalker almost makes you think he and Boyega were an afterthought this time around.

The film desperately struggles to fit in unused Carrie Fisher scenes, and though some do work others are painfully crowbarred in. All her scenes remind you how important Leia was and is to this series, and make it harder to understand why the better thing to have done to honour Fisher’s passing -quietly write her out – wasn’t done.

Of the remainder of a (large) cast, it would spoil things to discuss some appearances – though suffice to say only newcomers Richard E Grant (hamming it up as a nasty First Order leader) and Keri Russell (hidden behind a helmet as a former flame of Poe) make their mark – probably because they’re new faces! Anthony Daniels is more notable as C-3PO despite odd plot reversals, Kelly Marie Tran is disgracefully relegated to a bit part and other newcomer Naomi Ackie probably wonders why she bothered.

The one bright spot was the utterly bizarre and hilarious Babu Frik, a tiny little alien creation with a weirdly odd voice from Shirley Henderson. I’ll take a Disney+ series about the little weirdo any day.

I imagine there will be a lot of people who disagree with me, but I was so disappointed this series (and the whole saga) ended like this. The only good thing that can come from it is that Disney/Lucasfilm try brave new things with Star Wars at long last – this fictional universe (in the biggest sense of the word) is so ripe for brave new stories – let’s hope they take that jump rather than return to only pleasing the fans.