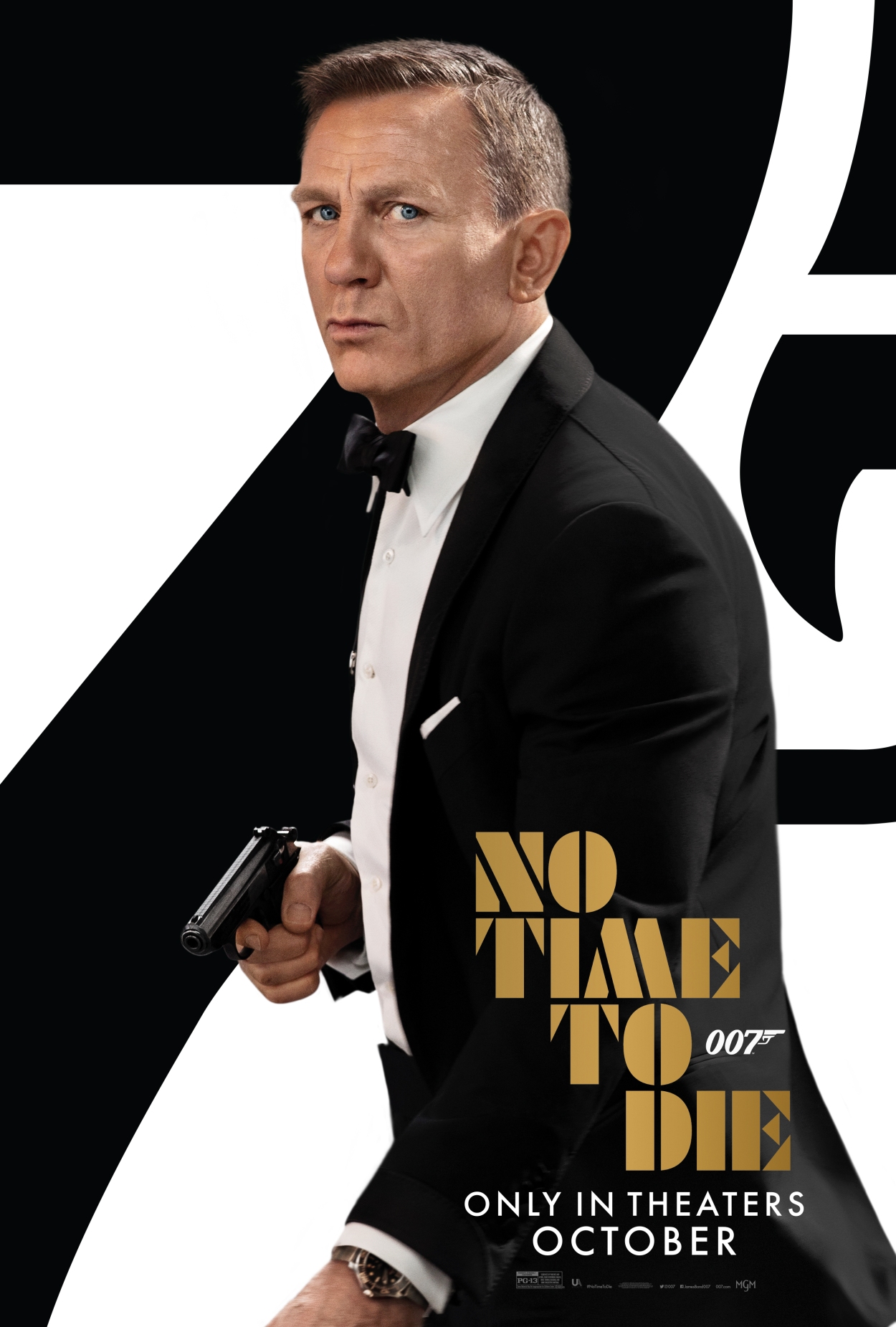 So here we are at last – 15 years after Casino Royale, and one and a half years since we should have seen No Time to Die, the film that was supposed to save cinemas (that promptly landed them in the shit with constant delays, thanks to COVID) is now out for anyone to see. And in my opinion, it was well worth the wait – but not for the reasons you might expect!

After the events of Spectre, Bond (Daniel Craig) and Madeline (Lea Seydoux) take it easy in Italy, and everyone’s favourite spy steps away from his job to live a life of romantic bliss – until their pasts come back to haunt them in multiple ways. As a result, both are drawn into crises and conflicts that interrelate with Bond’s dust-ups since Casino Royale, and which also concern the mysterious Safin (Rami Malek).

That’s a synopsis that honestly doesn’t even begin to cover the film, but the plot’s reveals and twists are best left for discovering at the cinema. If you haven’t had anything spoiled for you, get there and watch it before it’s ruined for you! Suffice to say, generally speaking, this is a great conclusion to Craig’s time as Bond, and feels more than worth the six years (SIX!) since the disappointment of Spectre.

The film’s directed by the first American to direct a Bond film, Cary Fukunaga, and his prior career (from True Detective series one, to African child soldier drama Beasts of No Nation) stood him in good stead, much like other recently new blockbuster directors like Black Widow’s Cate Shortland and Shang-Chi’s Destin Daniel Cretton. Fukunaga blends genres and folds them into the Bond superspy supergenre, with slow-burn horror, political mystery, sci-fi thriller, quippy comedy AND emotional tragedy all at once. Any Bond film worth its Aston Martins tries to be something a little different, and Fukunaga does this while also maintaining the brutal action and reverentially-referencing Craig Bonds before it.

He balances character development with action in such a way that it’s safe to say this was the most emotionally engaged I’ve ever been with a Bond film, with scenes of genuine emotion, heart and character growth. It’s testament to this iteration and the way it’s been handled that this feels like a worthy finale to a complete and cohesive mini-series. Fukunaga clearly delights in the immense budget he’s been permitted, with the filmmaking sharp, the action visceral, visible and sumptuously shot, and the locations as evocative and stunning as it gets for Bond (something this particular series has been great for, with even the lowlier Spectre and Quantum of Solace looking fantastic and evoking a strong sense of internationality).

This extends from the ancient beauty of Italy’s Matera (subject to a car chase, gunfight, explosions and all manner of destruction that’d make English Heritage weep) through to an eerie, foggy gunfight in a misty Norwegian forest. Everything has that similar air of sumptuous lighting that the films since Skyfall have had, with Linus Sandgren muting palettes in some places and utilising modernistic neons and glares elsewhere. The editing by Elliot Graham and Tom Cross also deserves a mention, especially in the third act’s crescendos, surprises and intercuts between different locations, all while maintaining an unprecedented emotional strength.

Fukunaga’s work here makes me wonder what he might do with other big-budget films in future, and what impresses me most is that he’s responsible for some huge Bond film choices here. He helped write the script with returning old hands Neal Purvis and Robert Wade, but the inclusion of Phoebe Waller-Bridge really set the internet ablaze. Having such a notable female screenwriter involved means scenes with the (many) female characters in Bond’s orbit sizzle and entertain, as well as noticeably unpicking the stereotypes that even Craig’s Bond films have been happy to fall into when it comes to female characters.

The plot is brilliant until you pick apart the main villain, his motivation and the method with which he threatens to achieve his goals – like many a Bond film or blockbuster, the script is excellent until you start noticing the plot chasms. When focused on the characters and their relationships, you can forget the silly slippage into science-fiction that much of this hinges on. However, with four writers it’s no surprise the film has strengths and weaknesses, and it’s impressive how Craig’s Bond storyline is all tied together here. This does mean it’s better than Spectre, but you need to have seen Spectre to get the references and story connections here.

Daniel Craig will be missed, and for me he’s the best Bond – yes, he’s perhaps not the book-authentic Sean Connery (for better and worse), or the arched-eyebrow, comedic Roger Moore or Pierce Brosnan, but for me his blend of believably brick-shithouse agent and emotionally cut-off (but slowly-thawing) human being gets to the heart of what a modern-day Bond should be.

He does some of his best work here, whether showing off his excellent comedic chops (Exhibit A: see Knives Out, right now), his adeptness at stuntwork despite being over 50, and his ability to seed that sense of a cold man slowly defrosting around others. He’s going to be a hard act to follow, and I’m not sure what will happen next – there’s a clear clamour for a more stupid, more nostalgic reboot, but like Timothy Dalton’s two movies, Craig’s five remind us Bond doesn’t have to be a smarmy piece of shit or a caricature – he can be an actual character, not a stereotype.

His chemistry with Seydoux is OK, but the icy French actress remains in deep freeze as the mysterious and aloof Madeline. It’s an interesting choice to make Bond’s second “love” after Vesper Lynd, and Seydoux’s almost detached performance makes it kind of work, even if it sometimes comes across as too cold. I would say however that she’s brilliant in some scenes where Madeline truly opens up.

I feel sorry for Rami Malek, because while his villain is set up in an organic and believable way (having rewatched Spectre, he’s even referenced in there!), his main motivation is vastly out of scale compared to his aims and methodology, which tend towards the batshit and smell a little too fantastical for this particular Bond. He’s underdeveloped, in the background for much of the film and loses out at the expense of the development of Bond and other characters, and the film would have been far stronger had his original appearance been more in keeping with what he goes on to do.

The trope of a Bond villain being disfigured continues (with the exception of Quantum of Solace’s Dominic Greene), and to be honest this feels stupid, embodying the franchise’s indecision and tug-of-war between old and new Bond. When Malek gets his chance, he’s chillingly grim in a couple of scenes, and would be a great villain in something a bit darker and with a little more to work with.

That indecision I discussed is rather more sensitively and sensibly handled elsewhere, with gadgets more incidental and believeable (bar the ridiculous element at the centre of the plot), but one scientist side character embodies a bizarre hybrid of the two Bond approaches. Central to the weapon at the film’s centre, he’s at turns bumbling, calculating and comic relief, but it then inexplicably revealed to be a truly nasty bastard – like the film wanted him to be an old and a new Bond character all at once.

Where this push and pull of old and new does work though is in Hans Zimmer’s score – and Bond and Zimmer was not a combo I expected to hear! It works really well though – there are the standard Zimmer flourishes (you’ll know them when you hear them), but otherwise it’s a propulsive blast that’s cleverly nostalgic. If you know your Bond films, some of Zimmer’s score will entertain and surprise you, and he knows exactly when and where to deploy certain famous themes for maximum effect.

I enjoy Billie Eilish’s music, especially her first album, and think she’s a top talent. While the title song underwhelmed me on release in 2020, within the impressively visual, distinctive and excellent opening credits here it’s much better. Zimmer’s interpolation of it into the score is pitch-perfect too, as the best Bond composers always have done, and while it’s a little too similar to Sam Smith’s Spectre effort, her sultry vocals give it an extra edge (when you’ve seen the film, look up the lyrics for extra resonance).

The remainder of the cast is a mix of underused returning faces and a few surprising new ones. Ralph Fiennes is more combative and on edge as a more involved, world-weary M, and his scenes with Craig blend conflict with a resigned, matey air that feels refreshing for this commander/agent relationship. Naomi Harris is sadly criminally underused here, a real shame given what the character of Moneypenny could have been after her introduction in Skyfall.

Ben Whishaw’s Q appears sporadically but in a far more comedic role than before, but again he’s a means to a plot end as is Rory Kinnear’s officious, bureaucractic Tanner. Lashana Lynch fares much better as Nomi, an MI6 agent who butts heads with Bond and very much embodies a new wave. Lynch is a breath of fresh air in scenes with Craig, and while they begin at cross purposes their chemistry is strong, with Waller-Bridge’s writing most evident here. It’d be a shame, should there be a reboot, that she doesn’t return.

Christoph Waltz returns to overdo it again as Blofeld (I still can’t get over how crowbarred in that was), though he’s mercifully a glorified cameo, and at least this time brings some of his Inglourious Basterds menace. There’s a welcome return for Jeffrey Wright’s perma-Hawaiian shirted Felix Leiter and his louche, carefree CIA antics, while Billy Magnussesn ooozes WASPY douche as a political appointee CIA agent with murky motives.

Finally, and saddest of all, Ana de Armas flies by and steals the film as Cuban CIA agent Paloma, winningly offbeat and working alongside Bond perfectly. Craig and de Armas’ previous work together in Knives Out couldn’t be any different to this, but their scenes here are just as enjoyable, and the film suffers once she departs.

If you’ve enjoyed Daniel Craig’s time as Bond, you owe it to yourself to see No Time to Die, which is a top send-off and sees the best Bond hang up his Walther PPK with a bang, all guns blazing. Most of all, seeing a Bond film in the cinema again (from the infamous gun barrel element onwards) is just excellent – it wouldn’t have had half the impact without the big screen or the big sound that the cinema provides.