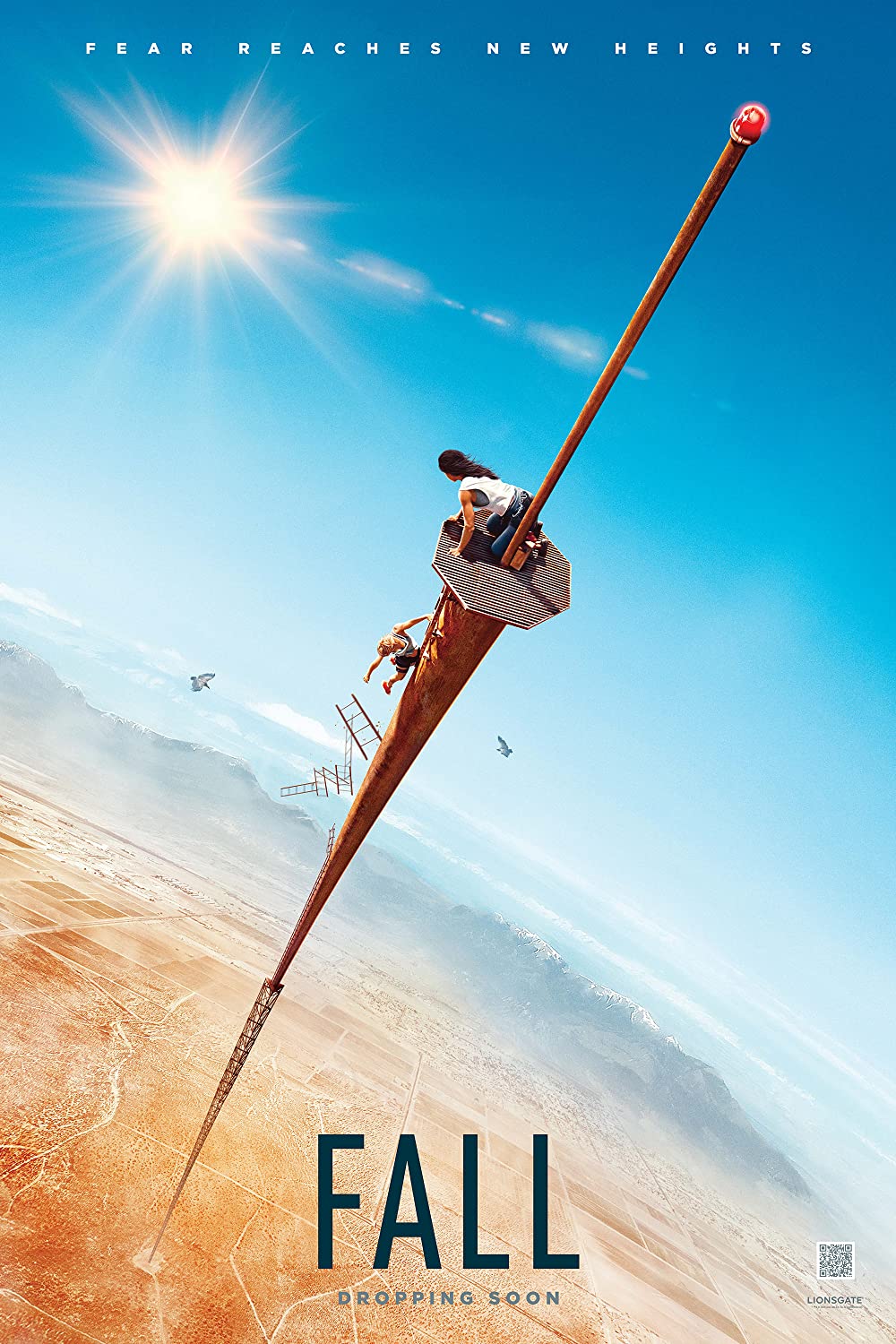 The high-concept action-thriller has plenty of prestige (Jaws, Speed – take your pick of films focused in one location or focused on one event or action), but for every excellent classic there are plenty of absolute duffers or films that just missed their potential. Fall is a perfect blend of the latter two categories – with a sprinkling, early on, of the first. However, soap-level acting and some shonky writing and effects sadly subtract from the thrills.

Becky (Grace Caroline Currey) loses husband in an unfortunate climbing accident, and disappears into drink and self-pity. Close friend and climbing YouTuber/influencer Hunter (Virginia Gardner) barrels back into Becky’s life, prompting her to join Hunter on a ridiculous climb up a truly vertiginous TV tower in the desert. What could possibly go wrong?!

Now that concept sounds excellent if you pitch it as an idea – in practice, and despite early promise, the film does not reach those heights (no pun intended). Director Scott Mann (who also writes alongside Jonathan Frank) has all the ingredients to make something great, contained and tense – and despite an unsteady start, the initial climb up the tower, and early moments while up it, were really quite uncomfortable to watch.

Sadly, however, the story takes some mad and implausible turns, and the limitations of the (really quite cheap) film are borne out on screen, puncturing the early promise and tension. Many a cheap film has gone on to be incredibly successful, or become an absolute classic (the ultimate example of this is the original Halloween, where director John Carpenter directed, wrote, edited and scored the film for next to nothing). Fall has a far better budget than that movie, and yet the joins and issues are very obvious.

Storywise, it doesn’t really get off to a great start when we’re expected to believe our protagonist Becky is so easily convinced to climb again after being so against it; and as the plot continues, the cheap soap-level intrigue and revelations shared by the friends seem to have been added for next to no reason, except to add further peril to an already unimaginably perilous scenario. A groan-inducing reveal early on is laughably bad, but a major surprise later in the film was quite clever – I’ll grant the writers that! I did think it was coming before it did, but the average cinemagoer may not.

However, everything concludes in a very rushed, and quite frankly unrealistic manner. The set pieces on and around the tower start believably, and very quickly become implausible. To add to this, the limitations of the budget for CGI make themselves known fairly soon, and it’s a real shame given the vivid cinematography of Miguel Olaso and the early promise (and extreme tension) of editor Rob Hall’s nerve-shredding cuts to close-ups of rusty, fracturing metalwork (even thinking about that is making me tense again).

While the film used location work (and therefore benefited from some excellent lighting, particularly at sunsets and dawns), there are too many points at which we can clearly see that the ground below is a hugely out-of-focus Google Map image. It’s so blatantly bad that it took me right out of the film, killing the tension that the movie had generously built up, and constrasting starkly with the brilliant (real) shots.

The music is also completely forgettable, Tim Despic’s score just standard action-thriller stereotypes. But despite the many issues, as mentioned earlier it is genuinely, Free Solo-level tense in some of those earlier stages (and if you just pretend the Google Maps screenshots aren’t really there). Mann, Olaso and Hall collaborate well with close-ups and clever angles (especially at the top when we’re clearly outside, and at some degree of actual height). The sound design is also well worth mentioning, as the groans and pings of the rusty tower exacerbate your growing dread.

What derails the film is the soap-level script and acting. As mentioned, the nonsense contrivances and character interrelations here are infuriating (though I must admit, the ways in which the women try to save themselves were both believable and quite interestingly thought out). Currey is really not very good, Becky a very blank canvas who’s essentially a moaning, shrill and whiny wuss, who then suddenly becomes resolute and strong when the story requires it. I feel bad for singling her out (I couldn’t do better!) but she’s given a really rum deal by the choices set out for her character, and she’s not good enough or distinctive enough to carry scenes in a film like this.

Gardner is definitely the better of the two stars, because she gets character development and to inhabit the hilariously plausible Hunter in many guises. Focused on being a good friend as well as a top climbing YouTuber/influencer, she provides the irritation and the humour that the film needs, while also getting to show different sides and abilities as the terror spirals out of control. And finally, because this film is curiously a three-star story, the far-too-famous-to-be-in-this Jeffrey Dean Morgan (what is he doing here?!) crops up as Becky’s understanding stereotype of a dad, for her to simultaneously rail against and secretly care about as the story demands. It’s like he turned up for one night of filming, and rather than phoning it in, he’s basically texting in his performance.

I got the distinct impression that with more money, a better cast and a more realistic script, Mann could have had a brilliant B-movie on his hands. It’s remarkable to think of the small changes or upgrades that could truly elevate (no pun intended!) Fall, and it’s fairly decent when isolating certain elements from the whole. Ironically, it would have benefitted from being more grounded…